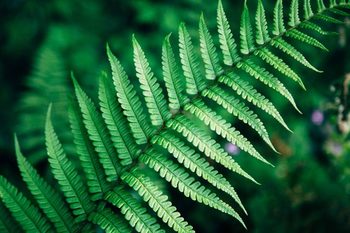 Pteridophyta are vascular plants which reproduce by spores and do not produce flowers and seeds. They are hence also known as vascular cryptogams.

3.       Sporophyte represents the dominant phase in the life cycle and it is nutritionally independent of the gametophyte.

5.       Root is adventitious and stem is either underground (rhizome) or aerial.

7.       Sporophyll bears sori on the lower surface or in microphyll, spores are present in strobilus or in cone.

10.   Spore germinates and give rise to gametophytic structure known as prothallus which may be monoecious in homosporous and dioecious in heterosporous.

13.   Fertilization takes place in presence of water and form diploid zygote which divides and re-divides and give rise to sporophyte.

14.   The young sporophyte is dependent on prothallus till the development of roots. 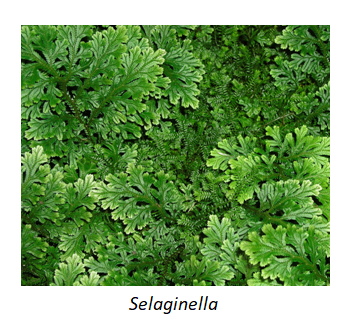 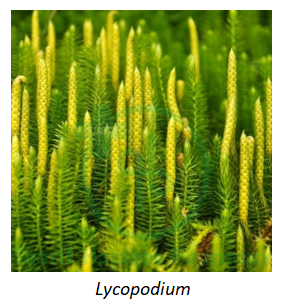 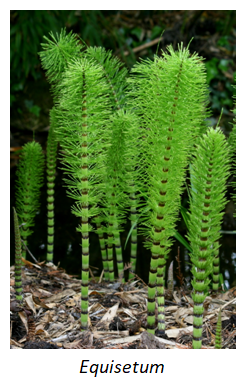 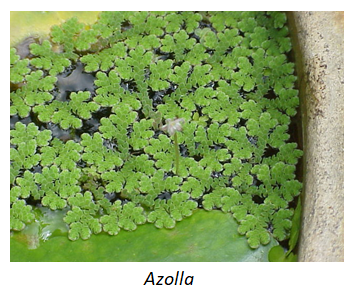 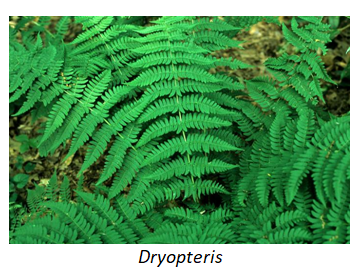 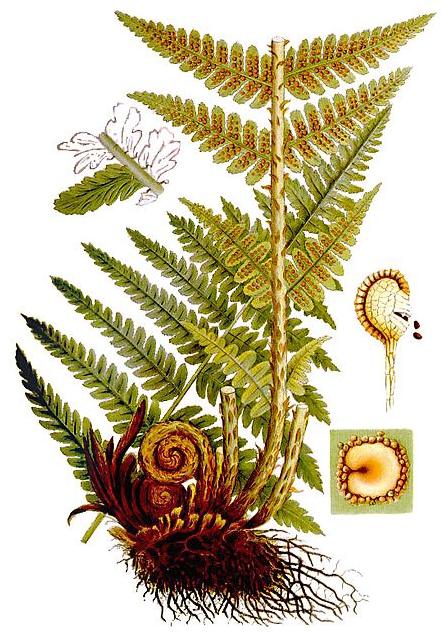 It is a perennial plant found abundantly in moist and shady places.

The plant body is sporophyte and consists of true root, stem and leaves. The dichotomously branched, modified, underground, perennial stem called Rhizome contains many adventitious roots on its lower side and large pinnately compound leaves on the upper side. The leaf (frond) contains a long petiole which grows upward in the form of rachis. The rachis contains many leaflets, the pinna divided into many pinnules. The scar of persistent leaf bases and petioles of old dry leaves make the surface of the rhizome irregular. Young circinately coiled leaves and the rhizome contain many brown scales known as ramenta.

It completes with asexual and sexual reproduction.

It takes place with the spores produced in sporangium born in many groups on the ventral surface of the matured leaf (sporophyte). Such a group of sporangia is known as sorus.  Many sori are arranged in rows on either side of the midrib of the pinnules. The sori are protected by kidney shaped indusium.

Each sporangium contains a long multicellular stalk having a water gland and a biconcave single layered jacketed capsule. It contains many spore mother cells which after meiosis produce haploid spores. Around the edge of the capsule, there is a vertical row of specially differentiated cells with very thick radial and tangential walls in its 2/3 portion, the annulus. The remaining 1/3 portion composed of long and thin walled cells are called stomium. Two cells in this stomium are narrow and radially elongated and are called lip cells through which capsule raptures at maturity to release spores. The spore when falls in suitable substratum germinates into a green dorsiventrally flattened gametophytic plants, the prothallus. It is monoecious and has unicellular rhizoids and reproductive structures on the ventral surface. 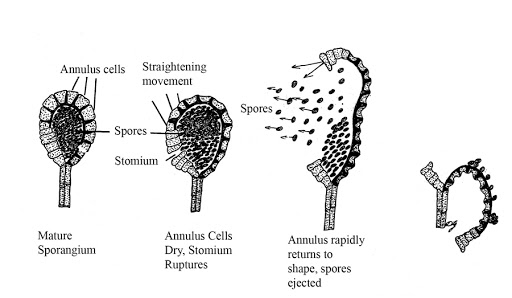 The male reproductive structure, the antheridia are produced towards the base while female reproductive structure, the archegonia are around the apical notch of the prothallus. Each antheridium is globular structure and produces many multinucleated antherozoids. The flask shaped archegonium, in the neck contains a binucleated neck canal and a venter canal cell and an egg in the venter. The mucilage formed by the degeneration of neck canal cell and venter canal cell not only helps in the opening of the lid cells of the neck to facilitate the fertilization but also attracts the antherozoids chemotactically. As the maturation period of the antheridium is earlier than that of archegonium (protandry), the zygote is always formed by the cross fertilization between the antherozoid and egg born in reproductive structures of different prothallus. The diploid zygote later on turns into embryo that develops into juveline sporophytic plant. 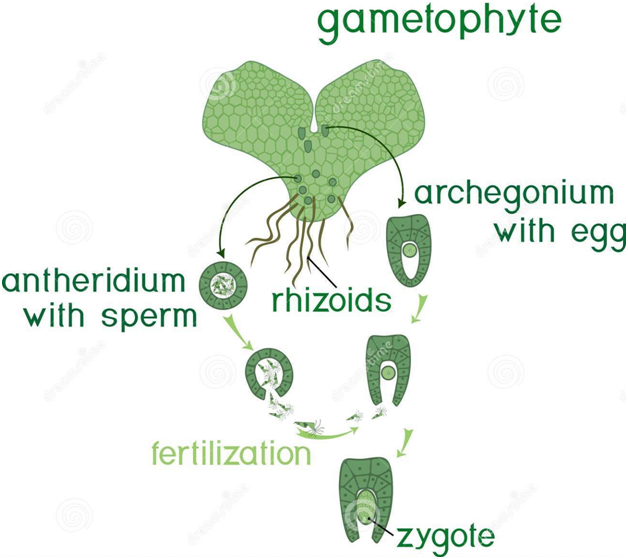 Alternation of Generation of Dryopteris

The main fern plant is sporophyte. The sporophyll bears sori (group of sporangia) on the abaxial surface of pinnules.  During asexual reproduction, spore mother cells enclosed in sporangia undergo meiosis cell division and form haploid spores. These spores are dispersed by air currents and on getting suitable substratum, germinate and give rise to gametophyte, the prothallus. Prothallus is green, dorsoventrally flattened,more or less heart shaped, independent, non-vascular, autotrophic and having apical notch. The prothallus bears male sex organ antheridia and female sex organ archegonia, which produce antherozoids and eggs respectively. Antherozoids and eggs fertilize with each other to form diploid zygote which further divides to form the embryo that later develops into the sporophyte, the Dryopteris plant. Thus, the life cylce of Dryopteris shows a cyclic change from diploid to haploid generation and from haploid to diploid generation alternately. 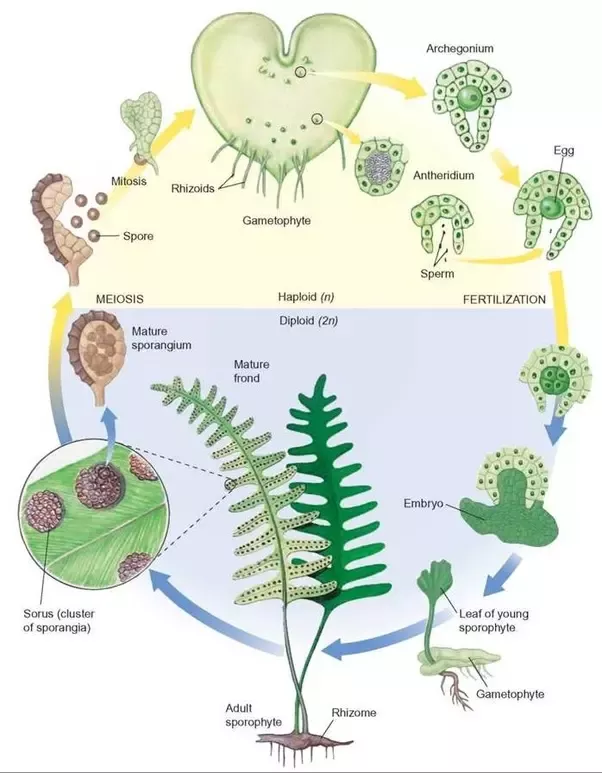 1.       Ornaments : Many pteridophytes such as Selaginella, Lycopodium, Polypodium, Pteridium, Nephrolepis, etc. are grown as ornamental plants.

2.       Soil Conservation : The growth of pteridophytes such as Lycopodium, Selaginella, etc. is used in the soil conservation in binding the soil even along hill slopes.

3.       Scouring : The stems of Equisetum have been used for cleaning (scouring) utensils and polishing metals.