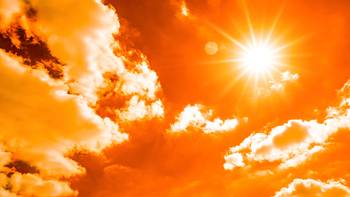 Heat is a very important source of energy. We use heat for different purposes in our daily life. Heat is the total kinetic energy of molecules that provides us with the sensation of warmth. Heat can flow from hotter to colder bodies.

﻿Heat energy is the result of the movement of tiny particles called atoms, molecules or ions in solids, liquids and gases. Heat energy can be transferred from one energy to another. The transfer or flow due to the difference in temperature in two objects is called heat.

For example, an ice cube has heat﻿ in it and so does a glass of lemonade. If you put the ice in the lemonade, the lemonade (which is warmer) will transfer some heat to the ice. In other words, it will heat up the ice. Eventually, the ice will melt and the lemonade and the water from the ice will have the same temperature. This is known as reaching the state of thermal equilibrium.

The total amount of heat possessed by a body i.e. internal energy depends on:

The nature of molecules is different for different bodies having the same mass are heated equally, their average kinetic energy will be different. That is, a molecule of a body vibrates about its mean position at a different speed from the molecule of another body at the same temperature.

1000 calorie is also called one kilocalorie.

One kilocalorie(kcal) heat is defined as that heat which is required to raise the temperature of 1kg pure water by 1°C or 1K.