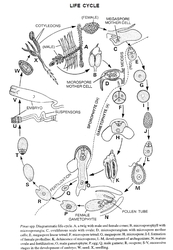 I had explained about the male cone, female cone and the structure present inside it including the pollination in Pinus in my previous note and let us begin with the reproductive structures over here. 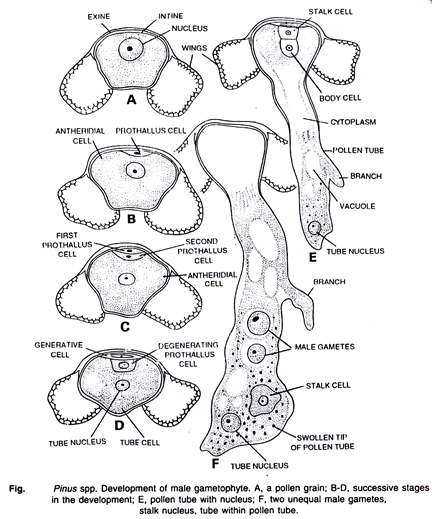 ﻿After pollination, the pollen grains are deposited on the pollen chamber inside the ovule. However, fertilization takes place only after the following year as the development of archegonia is very slow. After reaching the neck of archegonium the pollen grains burst at the apex and releases two male gametes. One of them move towards the egg nucleus and soon fuses forming a zygote or oospores.The oospore is the fertilized egg that represents the first cell of saprophytic generation. The second male gamete, tube cell and the stalk cell degenerates.

﻿During germination the seed coat first ruptures and the radical comes out forming a tap root where as plumule comes out of a soil forming a shoot system. The young seedlings develop into a adult sporophytes having long shoot with numerous of dwarf branches.

﻿Alternation of Generations in Pinus

These spores after germination develop into gametophytes. Pollination brings pollen grains into  pollen chamber in ovule. The pollen tube brusts in the archegonial chamber releasing the male gametes. The fusion of male gametes and female gametes give arise to oospores that represents the initial phase of saprophytic generation. The oospores finally develops into embryo then to seed which germinates and gives rise to saprophytic plant.

Hence one complete lifecycle of Pinus involve alternating cycles of sporophytic and gametophytic phases and this is called alternation of generations in Pinus .