How to Live Before You Die - Overview 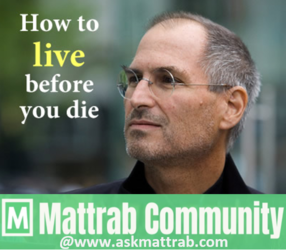 “You can’t connect the dots looking forward; you can only connect them looking backward. So, you have to trust that the dots will somehow connect in your future.” These words from Steve Jobs have not only a verbal theme but is a motivation to the middle-class people.

I personally take Mr. Jobs as one of my idols for his oceanic inspiration and speeches. From the oceanic thoughts of Steve Jobs, I take his speech “How to live before you Die” as the most impactful drop in my life. Here, he describes his ups and downs of his life in a motivating way which has touched me a lot and inspired me to put a value to my life, to my existence.

The first part of Steve Jobs’ speech is about connecting the dots. He talks about his birth, adoption, and struggle during his early years. He feels that connecting dots is the key to making sense of his life. He dropped out of college at the age of 17 because he did not want to join the normal class. He was later inspired by the beautiful posters he saw while studying calligraphy. He learned how to design his first computer using his knowledge of calligraphy.

The second story is about love and loss. Steve Jobs has narrated his story about how he fell in love with his work and how he lost his company. In 10 years, the company grew to be 2 billion dollars company. He worked hard and, in this period, he earned his reputation as a successful entrepreneur. He returned to Apple where he mixed both technologies together with his new visions that dominate the IT market.

The last or the third story is about death. He shares his experiences with cancer. He suffers from pancreatic cancer but never lost his hope. He became able to remove his cancer surgically. He says that we should enjoy every day as our last day. He says our time is limited so we shouldn’t waste it. We should utilize it before we die. Similarly, we mustn’t follow the crowd but instead, we should follow our heart.

This speech of him has inspired me to be what I want to be not what society wants or what other wants. We don’t have enough time to be what others wants us to be. Our time is limited so we mustn’t waste it living someone else's life. Let’s not embed our life with others which is living with the results of other people's thinking. We should not let the noise of others opinions drown out our own inner voice. And most importantly, have the courage to follow our heart and intuition. We must do what we love and love what we do. Let’s not give the steering of our life to other, it is all ours and we earn it. We should invest ourselves for ourselves. We know what should be done, we know how can it be done, we know it ought to be done but what we are lacking is to convert the knowledge into reality.

eleven english How to Live Before You Die