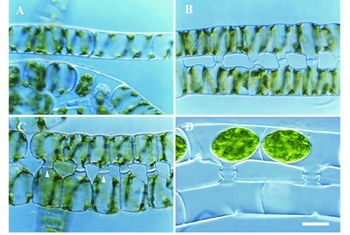 ﻿It is the method of reproduction through the existing vegetative structures of Spirogyra without any involvement of sex organs. 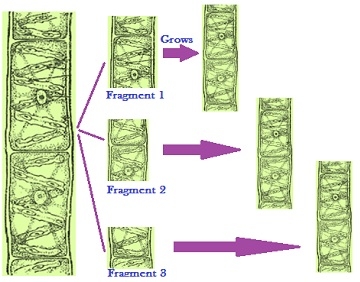 Asexual Reproduction
Asexual reproduction in Spirogyra takes place by the  formation of akinites, alphanospores and azygospores. 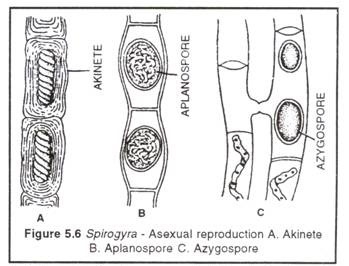 Akinete is a thick walled, resting spore which contains abundant food material. During unfavorable condition, the entire protoplasm of a vegetative cell in some species like Spirogyra farlowii loses water and contracts. It rounds off and become thickened by the addition of thick wall layers around it to form akinete.

Aplanospores are the thin walled  non motile spores which develop inside the vegetative cell due to the loss of water from the protoplasm. They contract and round off and secretes a thin wall around it. On returning to the favourable conditions the wall dissolves and produce new individual.

﻿Under failure of normal gametic union, Parenthospores are formed by the secretion of thick walls around and behave as zygospores. These zygospores on germination, forms new filament.