The phenomenon of  bending of light when it passes from one medium to another is called refraction of light. A prism is a transparent refracting medium bounded by two plane surfaces meeting each other along a straight edge.

﻿Refraction through a Prism 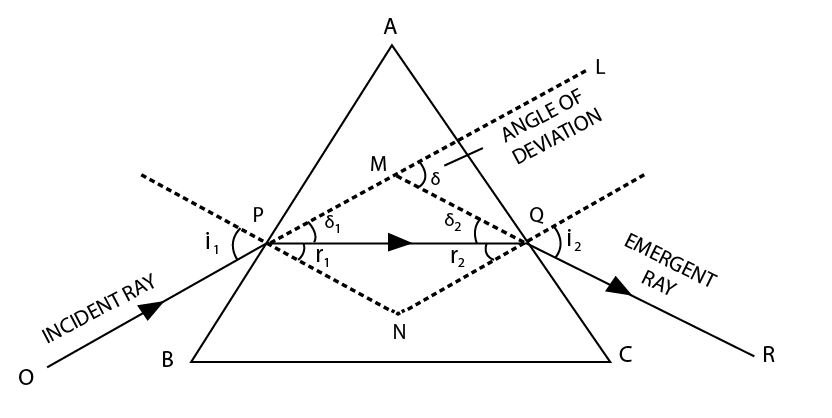 and QR is the emergent ray. Let A, B, C be the glass of the prism. Suppose BC is the base and AB and AC are its two refracting surfaces. From the above figure, we can say that OP is the incident. The ray traveling through the rarer medium and than the refractive index of the prism is the incident ray. As the ray PQ strikes the surface of the and it is called as the refracted ray. OR is the emergent ray which comes and When the ray light enters the glass, it bends towards normal and when ray comes out, it bends away from the normal. Now the angle between the emergent ray and incident ray is the angle of deviation. I2=e.  For a single refracting surface,  δ = |i – r| 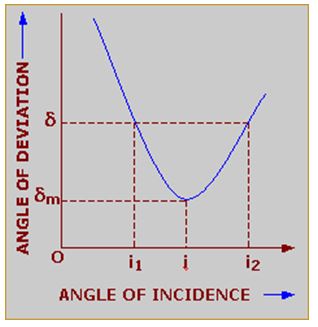 In this position, the angle of incident is equal to the angle of emergence, and angle of refection through first the refracted ray passes parallel to the base of an equilateral prism. So in minimum deviation position,

Thus, this is the relation between refractive index, angle of prism and angle of minimum deviation. 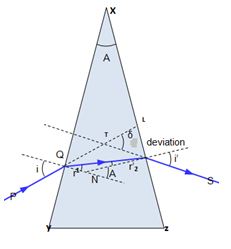 Since angle of incident is small then,

Substituting value of I and e in 1 we get

That is angle of deviation of a ray is independent with angle of incidence in a small angled prism.

When a ray of light is incident on a face of a prism with an angle of incidence 90o , the ray lies on the surface and is refracted through the prism. This refraction of the prism is called the grazing incidence.