↪ When two objects A and B are moving with different velocities, then the velocity of one object with respect to another object is called relative velocity.

↪ If both the objects are moving in same direction

↪ If the two objects are moving in opposite direction

↪ If the two objects are moving in opposite direction

↪ If the two objects are moving at any angle θ

↪ If rain is falling vertically with a velocity VR and an observer is moving horizontally with velocity VM,
↪ then velocity of rain with respect to observer will be, 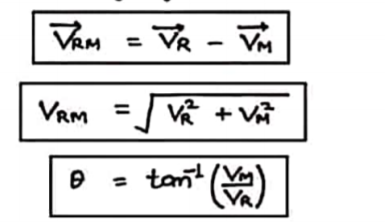 ↪ so in order to save himself from wetting person should hold umbrella at angle θ with vertical.

⁕ ﻿Swimming into the river

↪ ﻿A man can swim with velocity V i.e. it is the velocity of man w.r.t. still water.

↪ If water is also flowing velocity VR then velocity of man relative to ground is,

↪ If the swimming is in opposite direction to the flow of water then, 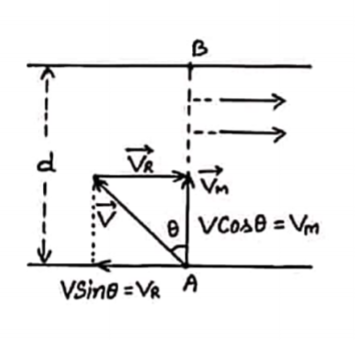 ↪ If man wants to cross the river such that his displacement should be minimum then is means that he wants to reach just opposite point across the river.

↪ Man should start swimming at an angle θ with the perpendicular to flow of the river.

↪ So that its resultant velocity
VM = V + VR is in the direction of displacement of AB. 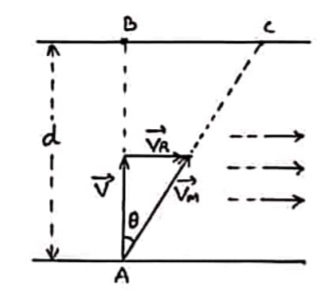 ↪ To cross the river in minimum time the velocity along AB (VCosθ) should be maximum.
↪ It is possible if θ = 0, i.e. swimming should start perpendicular to water current.

↪ Due to effect of river velocity i.e. his displacement will not be minimum but time taken to cross the river will be minimum.

↪ In time tmin swimmer travels distance BC along the river with the speed of river VR.