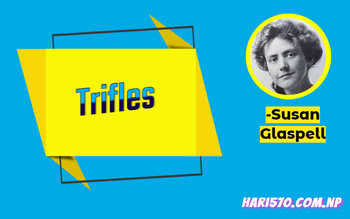 Trifles is a one act play written by American poet , novelist Susan Glaspell. Susan Glaspell covered this real life incident on her journey as a journalist . "Trifles" actually means less significant .The main theme of the play Trifles is gender discrimination or gender differences , loneliness or isolation and justice. It even covers the theme of revenge and domesticity .

George Henderson (The county attorney) : The county attorney, he has been called to investigate the murder of John Wright and will probably serve as the attorney for the prosecution in the event of a trial. He is young and professional in manner, but he often dismisses the female interest in minor details of domesticity, and he disparages Mrs. Wright for what he perceives as her lack of homemaking abilities.

Lewis Hale (Neighbor of the Wrights and husband to Mrs. Hale) : A neighboring farmer, he had entered the Wright farm house to ask John about acquiring a telephone, only to find a strangled man and a wife acting very bizarrely. He says, "Women are used to worrying about trifles."

Mrs. Peters (Wife of the sheriff) : The wife of the sheriff. Mrs. Peters is more timid than Mrs. Hale and more aware of the responsibilities the women have to the law and to their husbands when they uncover the truth of Minnie Wright’s murder of her husband. However, she is unwilling to expose the uncovered evidence to the men.

Mrs. Hale (Neighbor of the Wrights and wife of Lewis Hale) : The wife of the farmer Lewis Hale, she is of a heavier build than Mrs. Peters and resents the condescension/arrogance shown to her by the men in general and Henderson in particular because of her gender and domestic occupation. She remembers Mrs. Wright as the young Minnie Foster, and she feels sorry for Mrs. Wright. Mrs. Hale regrets not having come to visit Mrs. Wright to alleviate her cheerless life.

John Wright (The murder victim and owner of the house) : A local farmer, he was commonly considered a good, dutiful man, but he was also a hard man and neglected his wife's happiness. He paid little attention to his wife's opinions and prevented her from singing. The play centers on the motive for his murder

Mrs. Minnie Wright (John Wright's wife and his suspected murderer) : Born Minnie Foster, she used to be a happy, lively girl who sang in the local choir, but after she married John Wright, her life became unhappy and forlorn. Although she does not appear in the play, she is the main suspect in her husband's murder and sends Mrs. Peters and Mrs. Hale to collect a few minor items for her from the farmhouse

﻿Trifles is a one-act play by Susan Glaspell in which several neighbors enter the Wrights' farmhouse to investigate the murder of John Wright. John's wife, Minnie, is suspected of the murder. Mrs. Hale and Mrs. Peters accompany their husbands to the Wright house. The men look for evidence to use against Minnie, while the women gather Minnie's personal affects. Mrs. Hale and Mrs. Peters look around the kitchen. They find a broken bird cage and the corpse of Minnie's beloved canary with its neck broken. Mrs. Hale and Mrs. Peters sympathize with Minnie, realizing that her husband was abusive. They decide to hide the evidence. Sheriff Henry Peters and county attorney George Henderson visit the Wright home to investigate the murder of John Wright. His wife, Minnie Wright, has been arrested for the murder, and the two men have come to collect evidence against her. To that end, they have brought Lewis Hale, Minnie Wright's neighbor, who was the first person other than Minnie to see John's dead body. Hale will be a witness for the prosecution at the trial. With the three men are Mrs. Peters, the sheriff's wife, and Mrs. Hale, Lewis's wife, who have come to collect some of Minnie's personal effects to bring to her in prison. The sheriff is the first to enter the Wrights' little farmhouse. He and the other two men gather around the hot stove for warmth while the women linger in the doorway. It is clear that the two women are more upset about the murder than their husbands and that they have reservations about entering the house.