↪ Kinematics is a branch of mechanics which deals with the study of motion of an object without reference to mass or forces affecting the motion.

↪ The distance is different from displacement.

↪ Suppose an object has to move from initial position P to final position Q. 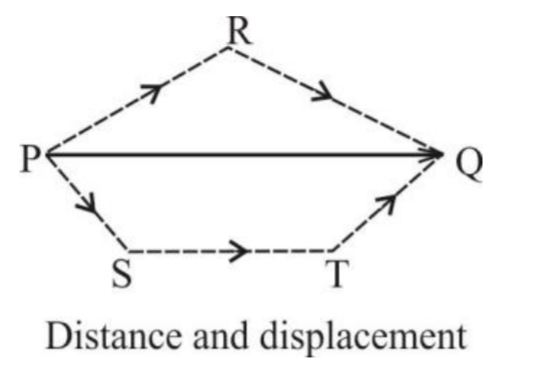 ⁕ Average and Instantaneous Velocity
↪ The average velocity of an object is defined as the total distance travelled divided by the time taken in a particular direction.

↪ The instantaneous velocity of the object is defined as its velocity at a particular point of its path or at a particular instant of time.
↪ So it is the limiting value of the average velocity when the time interval approaches zero.
That is,

⁕ Average and Instantaneous Acceleration
↪ The average acceleration of an object is defined as the rate of change of the average velocity.

↪ Suppose an object moving along the x-axis gains velocities ν1 and ν2 at times t1 and t2 respectively.

↪ Thus the average acceleration is

↪ A graph of the displacement of an object and time is called a displacement-time graph or s-t graph.

↪ A graph of the velocity of an object and time is called a velocity-time graph or v-t graph.