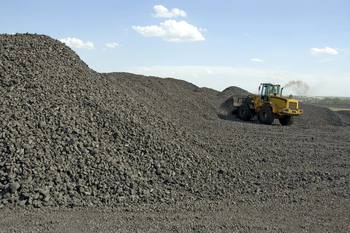 Fossil fuel, any class of hydrocarbon-containing materials of biological origin occurring within Earth's crust that can be used as a source of energy. Fossil fuels include coal, petroleum, natural gas, oil shales, bitumens, tar sands and heavy oil. All contain carbon and were formed as a result of geologic processes acting on the remains of an organic matter produced by photosynthesis, a process that began in the Archean Eon (4.0 billion to 2.5 billion years ago). Now, we will talk about two of the fossil fuels which are coal and petroleum.

﻿It is a non-renewable source of energy found in deep mines beneath the surface of the earth. It is taken out by mining. It is defined by having 50% by weight (or 70% by volume) carbonaceous matter produced by compaction and hardening of altered plant remains.

In Nepal, only low-quality coal mines ( lignite ) are found in Dang district. High-quality coal ( anthracite ) has not been found yet. Coal is used as a form of energy. Here is a summary table about the condition of coal in Nepal.

﻿Petroleum, complex mixture of hydrocarbons that occur on Earth in liquid, gaseous, or solid form. The term is often restricted to the liquid form, commonly called crude oil, but, as a technical term, petroleum also includes natural gas and the viscous or solid form known as bitumen, which is found in tar sands. The liquid and gaseous phases of petroleum constitute the most primary of the fossil fuels.

Liquid and gaseous hydrocarbons are so intimately associated in nature that it has become customary to shorten the expression " petroleum and natural gas " to " petroleum " when referring to both. The word petroleum ( literally " rock oil " from the Latin petra, " rock" or "stone", and oleum, " oil " ) was first used in 1556 in a treatise published by the German mineralogist Georg Bauer, known as Georgius Agricola.

Status of petroleum in Nepal

﻿When we talk about petroleum and its uses, most people generally think of it as a fuel either petrol or diesel. However, petroleum has been used in one way or another. It is an important substance across politics, society, technology, including in the economy. Now, some of the uses of petroleum are as follows:

﻿Links for you so you can understand