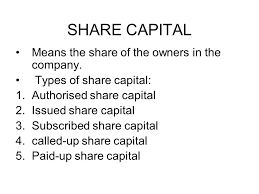 ﻿Share Capital is the money a company raises from issuing preferred or common stock shares. A company's share capital or equity financing can change over time. When a company wishes to raise more equity, it can obtain authorization to issue new shares to existing or new shareholders.

﻿In other word “share capital is the ownership capital of a company raised by the issue of its shares. It is an amount invested by the shareholders towards the nominal value of shares. A company needs share capital in order to finance its activities."

﻿It is the part of the authorized capital, which is actually offered to the public for subscription. It is the face value of the shares that have been issued to the shareholders. Issued share capital and share premium represent the amount invested by the shareholders in the company.

﻿It is that part of the issued capital, which is actually taken up by the investors. Subscribed capital means the amount of capital for which written commitments were received from bank shareholders (stockholders) for the contribution of funds under subscription to shares (stock).

﻿The amount of share capital due on shares is normally collected from the shareholders in instalments at different intervals. The called-up capital is that part of the nominal values of shares subscribed by shareholders, which is requested by the company for payment. The uncalled capital if retained by the company to be called up for the payment of creditors on liquidation is treated as reserve capital.