Group with elements other than numbers 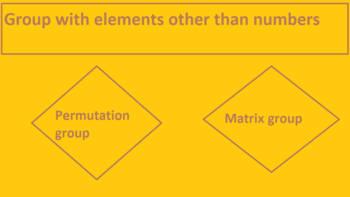 ﻿b) Matrix Group:A matrix group is a group G consisting of invertible matrices over a specified field K, with the operation of matrix multiplication. A linear group is an abstract group that is isomorphic to a matrix group over a field K.

Suppose we toss a coin. We then get either head H or a tail T. Consider the set G={H,T} and the ordered rearrangements or permutations of its elements .Obviously , only two cases arise:  H T or T H .

This situation is represented symbolically in the following way:

Consider the set SG  ={σ,µ} and define the binary operation * on SG as  the product or composition ' σµ' or 'σ *µ' of the two permutation as ' One permutation σ followed by another permutation  µ ' or 'Do σ and then µ'.

which shows σ is both an identity element and inverse of itself.

which confirms σ   ﻿is an identity element.

which shows µ is the inverse of itself.

The set of square matrices of a given order is known to possess the associative property , the zero matrix as the identity matrix and the negative of a matrix as the inverse of the matrix. This means the set of all square matrices of a given  order is a group .Such a group is known as the matrix group of the given order .A matrix group of order 2 under matrix addition is generally denoted by: