Lateral Shift and Types of Depths 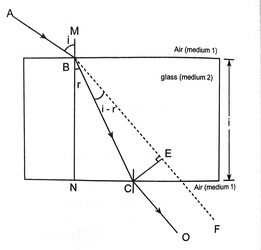 The lateral displacement is discussed for the incident ray by considering the passage of light ray from air (medium 1) to glass (medium 2) to air (medium 1). As shown in figure, suppose a ray of light AB travelling in air is refracted along BC into glass and emerges into air along CD.

Let 'i' and 'r' are the angle of incidence in air and angle of refraction in glass. The perpendicular distance CE between the emergent ray CD and the produced incident ray AB gives the measure of lateral displacement for incident ray produced by glass. 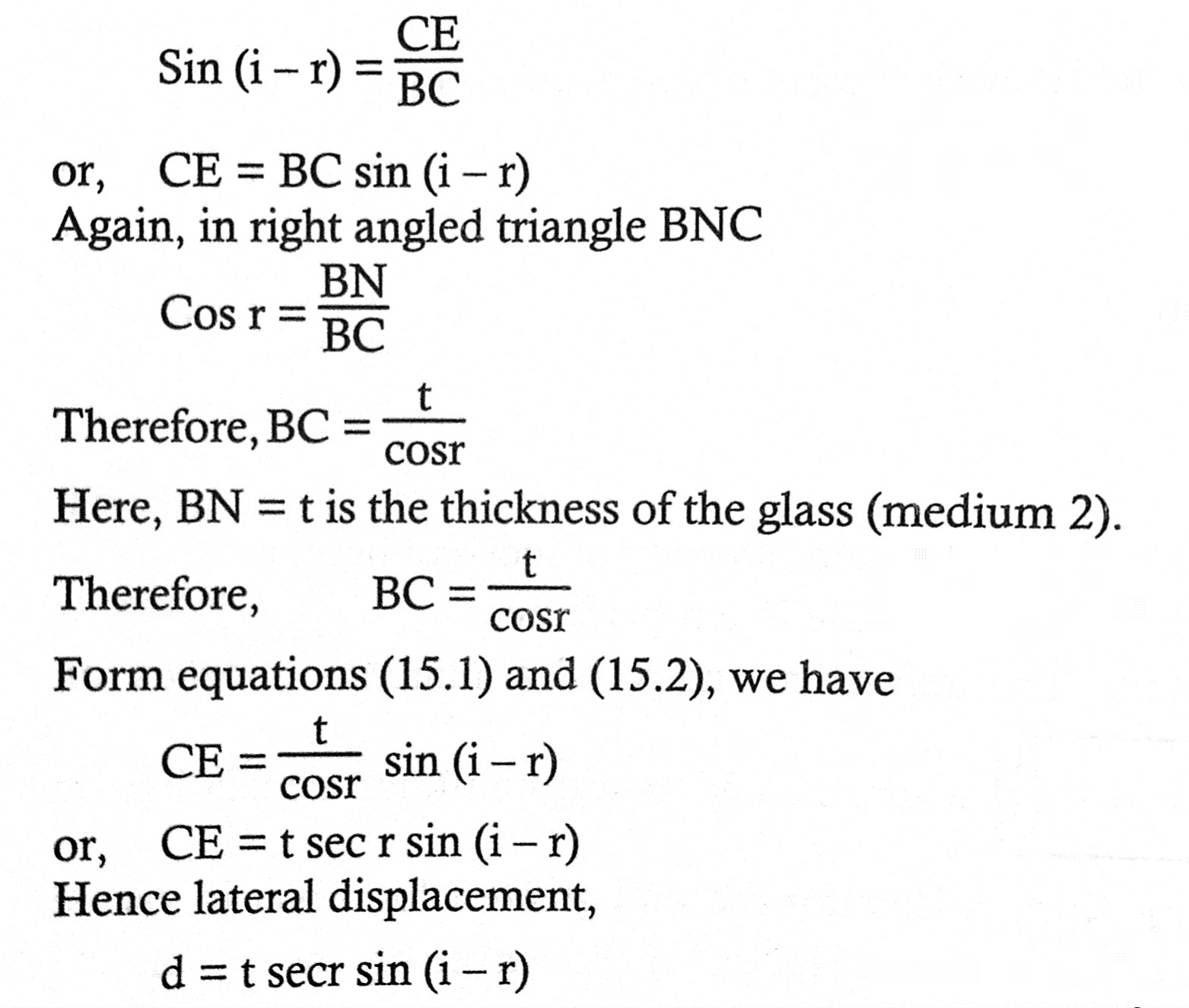 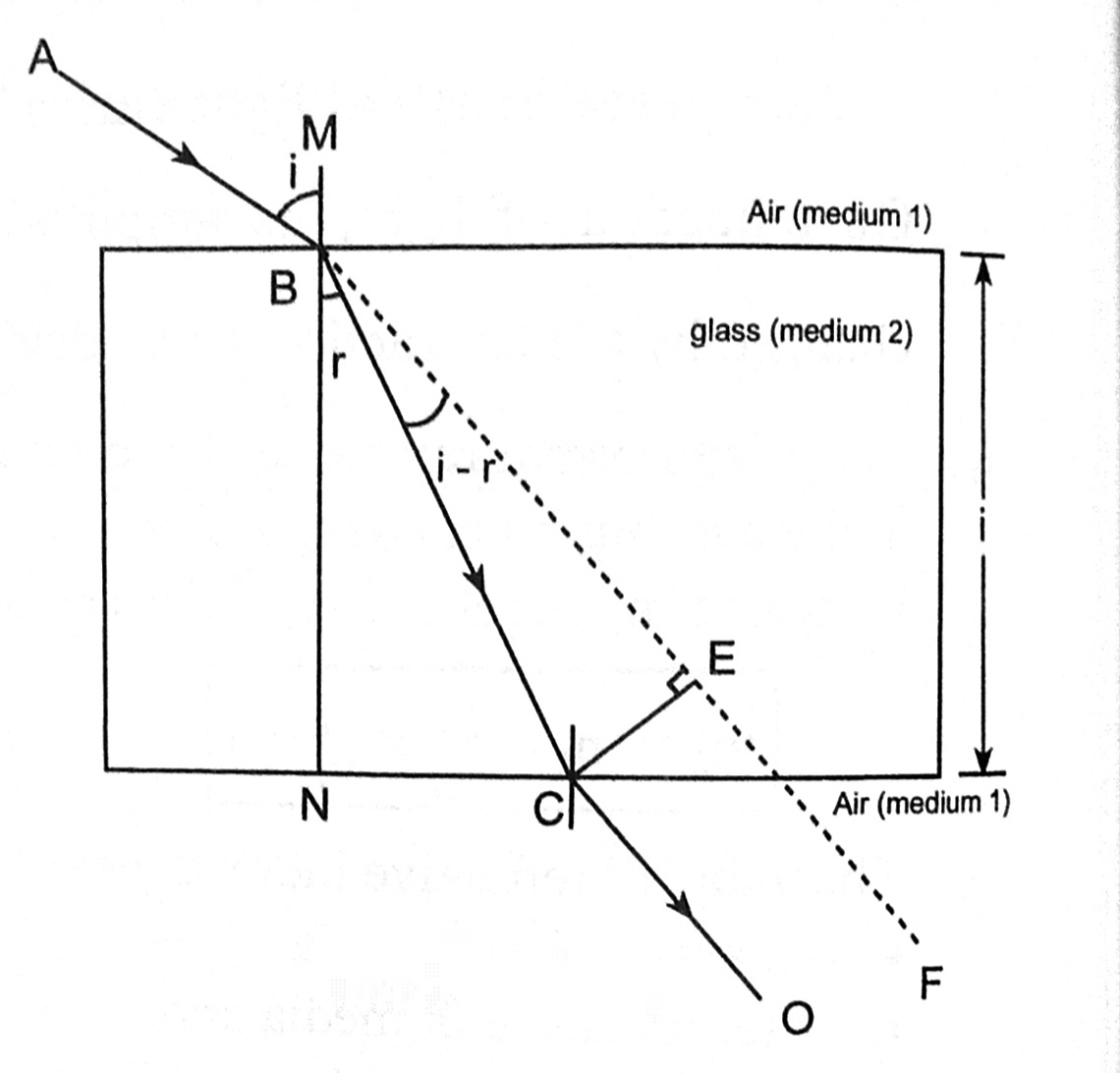 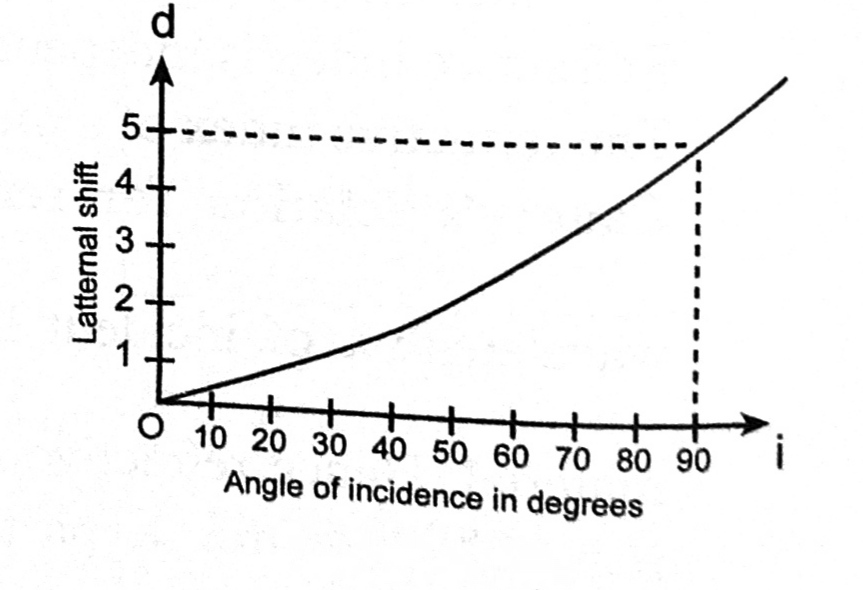 When i=r, which is possible for normal incidence (i=0°), d=0. There will be no lateral shift of the emergent ray if the light is incident normally on the glass (medium 2).

When light is incident parallel to the glass slab, the lateral displacement (shift) is equal to the thickness of the glass (medium 2).

Due to refraction, the depth of an object lying inside an optically denser medium appears to be less than its real depth.

Let, an object O at a distance t below the surface PQ of a transparent medium such as glass, which has absolute refractive index ng

A ray OA from O perpendicular to surface PQ passes straight into the air. A ray OB very close to OA is refracted into air along BD. If BD is produced to meet OA at I, which is the position of virtual image of the object O i.e., an observer viewing O directly overhead sees it in the postion of I. Hence, A1 is the apparent depth of the object where as its real depth is AO. Let i and r are respectively the angles made by the rays OB in glass and BD in air with the normal at B. Then, for refraction at B, from glads to air, we have,

Where na is the absolute refractive index of air which is unity. 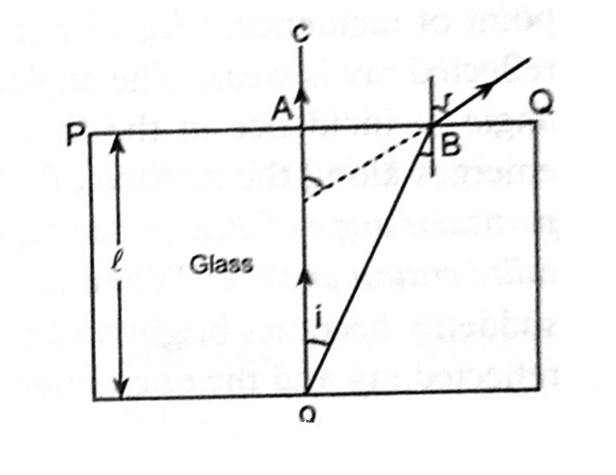 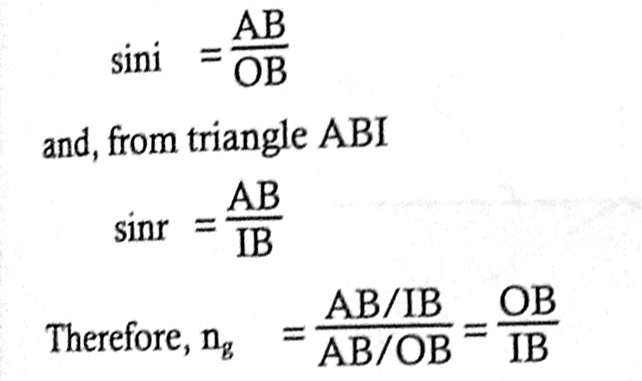 Since, the observer is directly above O, the angles i and r are small and the rays OB and IB are very close to OA i.e. B is very close to A, then. 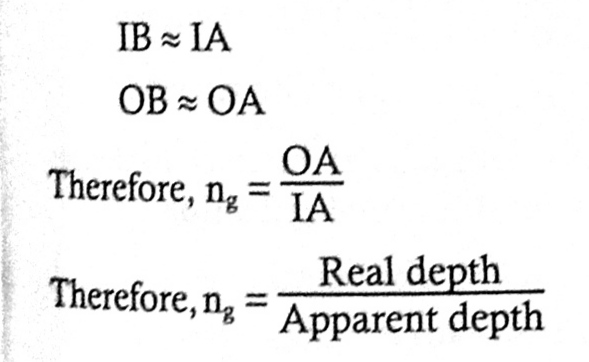 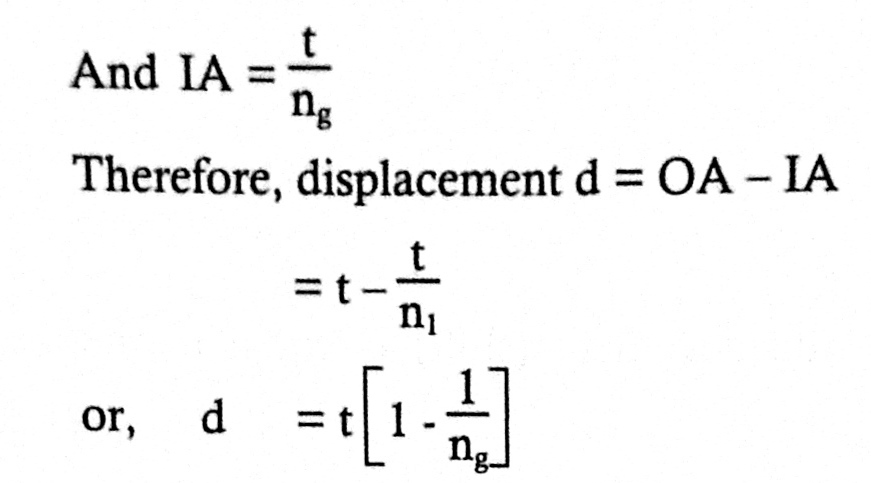 Total internal reflection may be defined as the phenomenon of reflection of light that takes place, when a ray of light travelling in a denser medium gets incident at the interface of two media at an angle greater than the critical angle for that pair of media. 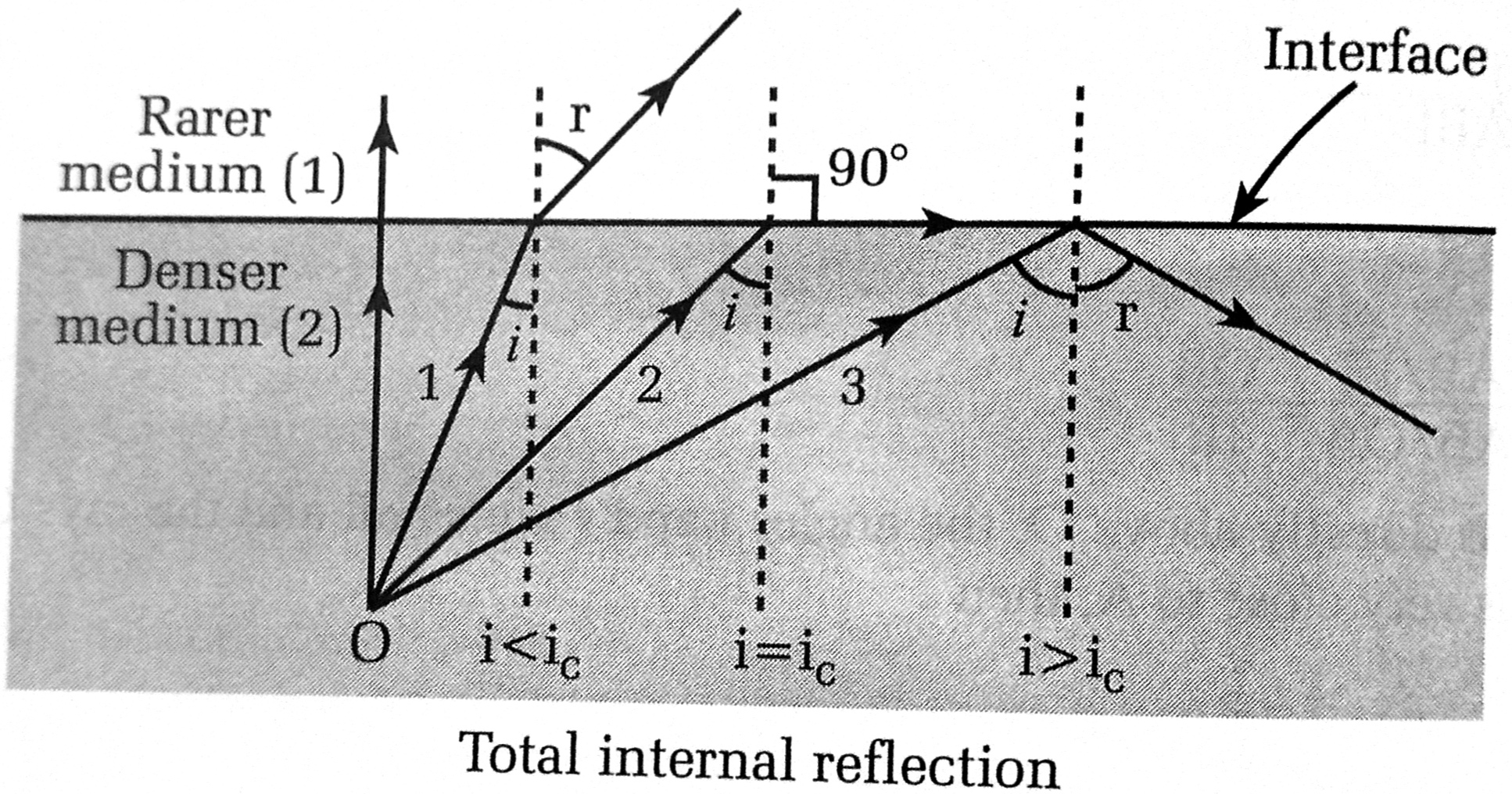 The critical angle (C) for a pair of media maybe defined as the angle of incidence in the denser medium, for which the angle of refraction in the rarer medium is 90°.

1. Light ray must travel from denser medium to rarer medium.

2. The angle of incidence in denser medium must be greater than the critical angle for these two media. 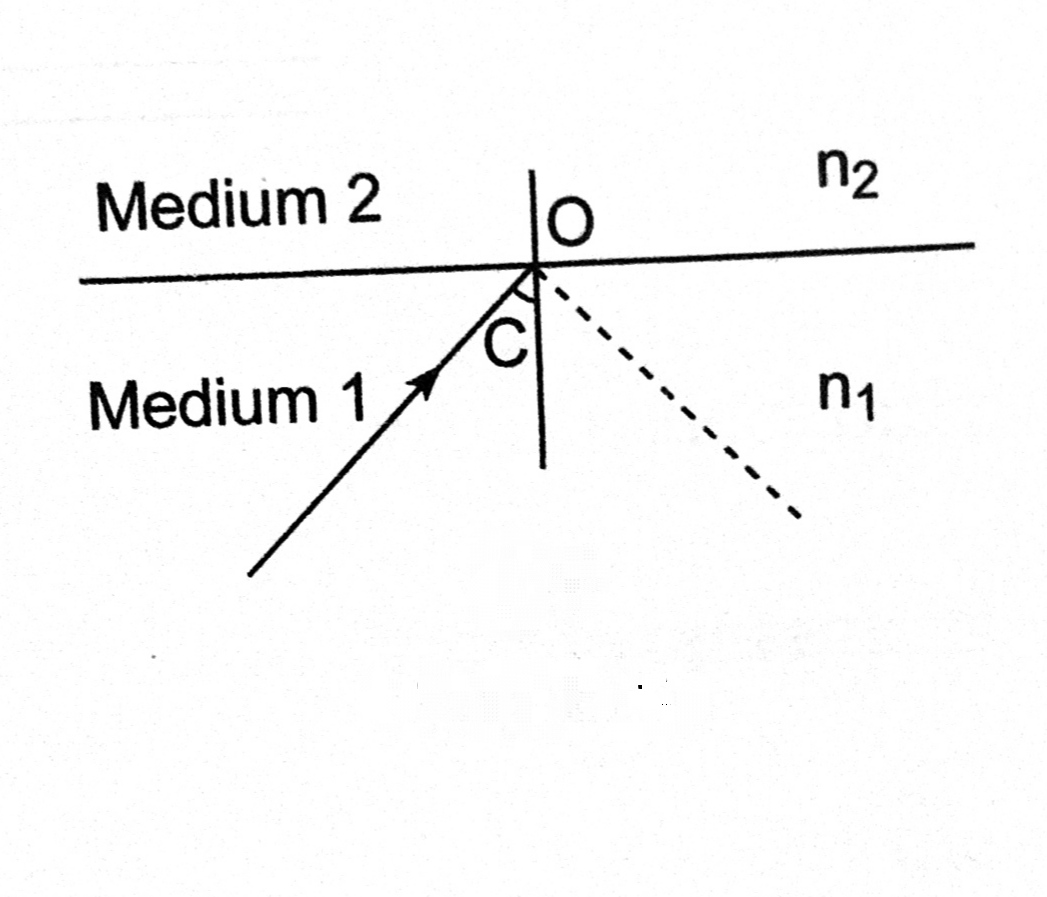 If the second medium is air, 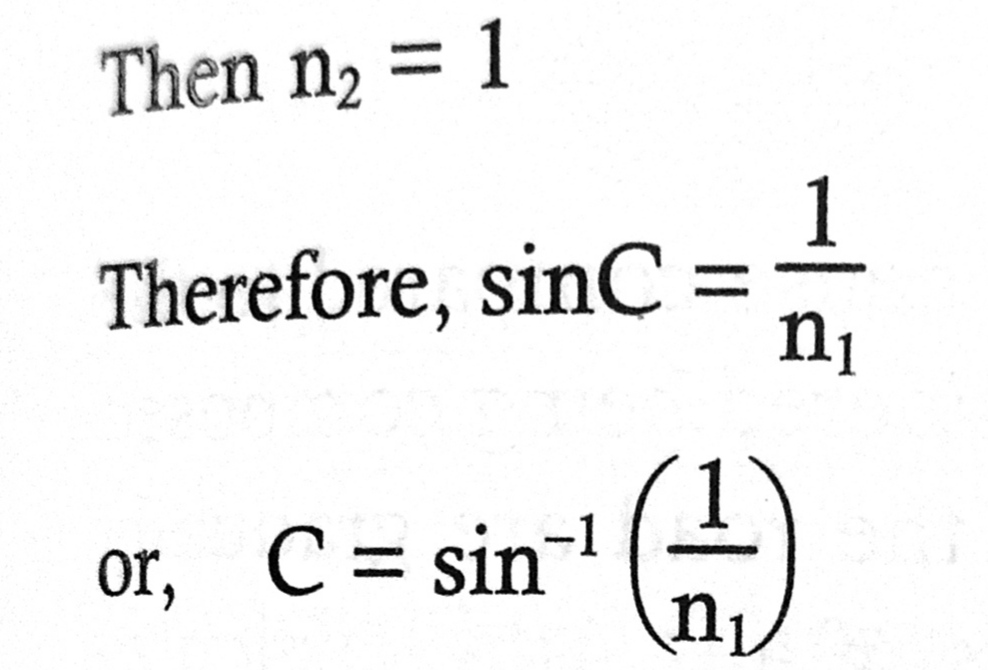 Similarly, the critical angle for glads water interface is 62.7°.