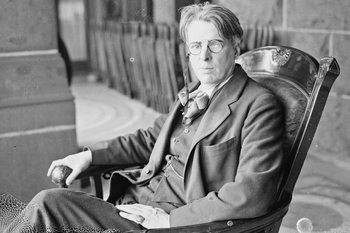 W.B. Yeats “Purgatory" deals on the theme of crime and confession. He presents the predicament of a family; the family whose history is pathetic; present and future is also similar to the past. He shows the spirit suffering because of the wrong deeds of the past. Moreover, he depicts what a person does to relieve the soul from purgatory.

One moonlight night, the boy and his father walk on; they are near a ruined house. Pointing towards the house, the old man describes the past of it. The house used to be occupied by his mother and her husband. The mother of the old man had married with the groom of the stable as soon as she met him. The man later turned out to be a drunkard and gambler. Due to drinking and gambling he emptied everything she had. The mother died during giving birth to him. The father continued his misdeed, which at last resulted into the complete destruction of house. Because of fear-the fear of his son becoming greater than him, he didn't send hint to school. When he was sixteen, his father burnt down the house. This situation creates anger in the boy. As a result the old man got killed with a knife. The boy then became a peddler. The old man tells his bastard son that the night is the anniversary of mother’s wedding. As he finishes telling his son about the past, a shadow appears to which the man can only see. A little later her husband also appears, and they both proceed towards room. The old man objects to the way they go inside. After the incident is over the boy talks about property he has acquired. The bastard son demands for his share in property of his father, which is denied by him. I arises anger in him. As a result he takes money bag from his father. A quarrel starts between them the boy gets killed at last with the knife of the old man. The old, after it, addresses his mother and claims that he has ended the consequences. He hopes that the soul of mother would be purified whereas policeman continued talking with smiling face. The boy, at the meantime, heard sound coming from beneath. He desired to reduce the loudness pf the sound. For this purpose, he spoke louder, though it didn’t do any good. He felt the sound growing; he felt policeman's smile as the smile of mockery. It became unbearable for him to keep the reality secret. He thought it better to confess than to hide. Eventually he confessed the crime.