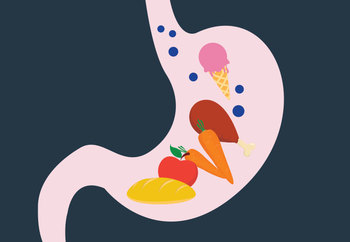 Digestion is the process of breaking down complex organic food substances into smaller and simpler forms so that it can be easily incorporated by our body.

Water, vitamins, and minerals are not needed to be digested but are directly absorbed.

Physiology of it is studied under following  headings :

Ingestion : this is a scientific term for eating. We humans have holozoic ingestion.

In humans both chemical and physical  digestion begins in the mouth . in contrast to frogs whose digestion doesn't occur in the mouth.

Starch (about 30 %), in presence of salivary amylase/ptyalin, is converted to maltose, maltotriose and dextrose.

Lingual lipase is in the mouth but as it requires an acidic medium, no digestion occurs due to it. Rather it goes down to the stomach with the bolus of food.

Digestion in the stomach :

Hcl  converts pepsinogen/inactive  to pepsin and pro-rennin to rennin (in case of babies).

Eventually , pepsin changes protein of about 20% to peptides . And in babies it changes paracasein to peptides.

Lipids  are changed to fatty acids and glycerol by  activated salivary lipase or  gastric lipase  which is only in babies .  Thus,  lipase digestion in the stomach seems insignificant, being only around 10 %.

Here, bile and pancreatic juice acts upon the chyme.

(chyme is the result of digestion in the stomach)

Pancreatic juice is also called complete digestive juice as it possesses all 3 enzymes to digest all 3 macronutrients.

Amylase, in the duodenum, converts remaining starch to its monomers.

Pancreatic lipase converts most of the lipid to fatty acid and glycerol. Before this, bile juice comes in  to emulsify  and  coat  the last product  from fats  due to lipase.

Ribonuclease and deoxyribonuclease  convert RNA and DNA  to  respective nucleotides.

All the intestinal juices are termed as succus entericus which act in ileum.

Aminopeptidase and dipeptidase  finally act upon  peptides and convert them to aminoacids .

Lactase  act upon lactose to  break them into galactose and glucose .

No digestion occurs in anus and large intestine.

For sake of simplicity, we can learn the physiology from the below table (they can be  shown in reaction form according to your convenience). 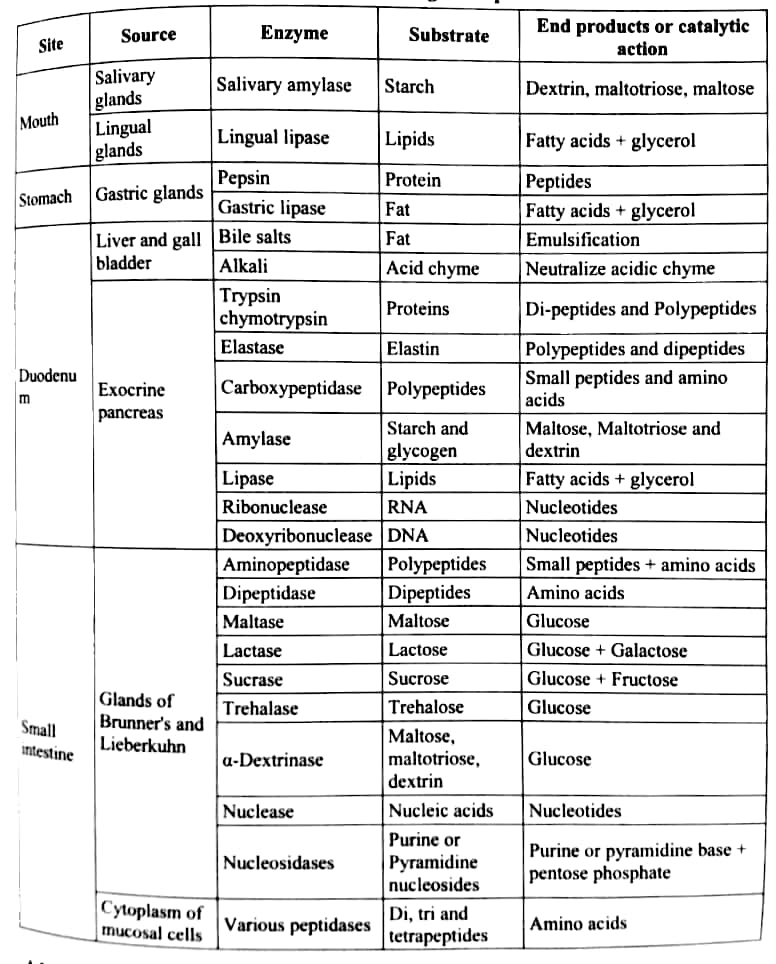 The  process  by which simplified foods are incorporated into blood vessels or lacteals for using or storing  them  as per needs. It can be  actively using ATP or passively with respect to osmotic gradients.

1.Starts from the mouth :  certain drugs and water get absorbed here.

Water and Alcohol  is readily absorbed from here.   so we get intoxicated by alcohol fastly.

Calcium , iron and vitamin C are  the prominent ones to be absorbed from here.

Glucose, galactose are absorbed to the luminal surface by   secondary active transport, i.e., by the indirect use of ATP.

Fructose are absorbed by luminal surface by facilitated diffusion .

While , everything in the luminal surface  is absorbed to  blood vessels’ basal membrane  by facilitated diffusion .

When bile acids coats digested fats, it is called micelles. Now leaving, coated layer , inner content enters enterocytes. Now, inside enterocytes, they combine with apoprotein  to form lipo proteins  of 4 -5 types, of which chylomicrons are the least dense.

Chylomicrons  as being  most permeable to lacteals enter and then combine with  lymphs to form chyle  and  then enter to blood.

Lacteals are mostly found in  jejunum so it’s clear that fat absorption is mostly there.

They are  absorbed in the form of amino acids or di peptides .

Little water and electrolytes are absorbed here too.

Here only water and electrolytes are absorbed through osmosis.

This  is the final step where undigested and unabsorbed foods are ejected out .

For concepts you can even go though this video :