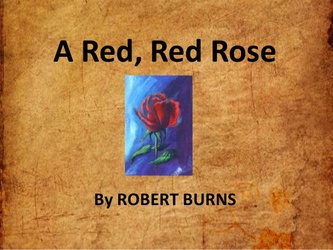 Robert Burns (1759-1796) was a Scottish poet and lyricist. He is considered the national poet of Scotland and a central figure in Scottish literature. He grew up poor but well-read and began writing poetry in Scottish dialect. He was never in good health. On the morning of July 21, 1796, he died at the age of 37. He is best known as a pioneer of the Romantic Movement for his lyrical poetry.

The poem "A Red, Red Rose" is a lyrical ballad that describes the speaker’s deep love for his beloved and promises that this love will last longer than human life. The beloved of the speaker is as beautiful as the red rose and as sweet as the music. With the help of literary devices, the poet has sketched a very vivid and realistic picture of his profound love.

The poem "A Red, Red Rose" is composed by Robert Burns, a famous Scottish poet. A Red, Red Rose is a lyric about the poet's intense love. The poem is about the speaker's lovable feelings for his beautiful beloved. The speaker compares his beloved to June's fresh red rose and the sweet melody of a tune. He claims that his love is so beautiful that he loves her with a deep and strong passion. He wants to be with her and love her until the gang of earthly seas go dry, rocks melt, and human life ends. It shows that the speaker is envious or over possessive towards his love. At last, the speaker bids farewell to his beloved with imagery that after all roses fade and even the most beautiful music eventually ends but in one last illustration of the strength of his love, he will return back been if they will be ten thousand miles apart.

The theme of the poem:

﻿The theme of the poem is about the power of love.