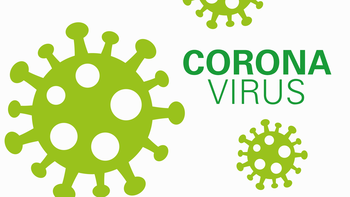 Vishnu S Rai (1951-) was educated in India, Nepal, and the UK. He taught English at Tribhuvan University for three decades and retired as Professor of English Language Education. Rai writes both in English and Nepali. He has written stories, Martyrs, & Other Stories (English), play Realities (English), travelogues Nau Dandapari (Nepali), and a novel Paheli (Nepali). Rai is known as a poet of human emotions.

The poem, "Corona Says", written on the theme of the present world crisis Corona and its devastating impact on human life, is a subtle satire on man's conduct and attitude. It views Covid 19 as the byproduct of man's treatment of nature Vishnu S. Rai's poem "corona says" illustrates the world's dreadful situation with the coronavirus. It lets us realize that the coronavirus was not invited by itself, but rather by industrialization, civilization, organization, pollution, and other human activities.

In the poem,  coronavirus itself is a speaker. It addressed the human beings asking them not to cry as crush the virus. The speaker (corona) rejects the blame, claiming that it is not her fault, but that people are to blame for such widespread devastation. It was not brought here by itself, but by mankind.

The people of the world think of themselves as the creator of everything. Humans call themselves "the crown of creation". They believe that all other species are servants to them and that they can kill or destroy them. This includes birds, water animals, insects, and trees. In fact, humans are unaware of the significance of other organisms on the planet.

The speaker then depicts another side of the situation. Almost all human activities have ceased during the lengthy lockdown. Motherland took a little break. And nature has returned to its natural state: clear skies and pollution-free air. That is a benefit of the corona period. It also demonstrates that if we (humans) do not abuse nature, it will calm down.

Corona warns people not to think of the earth as solely human property. The Earth does not solely belong to humans. All living things must share it equally.

In the end, the speaker gives people a warning stating if they don't change their ways, there will be trouble that could push civilization all the way back to "cave time."