↪ Sodium is very active metal and does not occur in free state in nature.
↪ Some important ores of sodium are:

i. Rock Salt or common salt (NaCl)
ii. Chile saltpetre (NaNO3)
iii. Borax (Na2B4O7.10H2O)
iv. Sodium carbonate (Na2CO3)
﻿Extraction of sodium by Down’s process
↪ As Sodium metal is very reactive and powerful reducing agent.
↪ So, it can’t be extracted by carbon reduction, aluminium reduction and hydrogen reduction method.
Difficulties for the extraction of Sodium
↪ Ores of sodium were known as early as the ores of Fe and Cu but the extraction of sodium become feasible much later.
This was because of the following difficulties:

1. The ores of sodium e.g. NaCl, Na2CO3, etc. are very stable and reduction is difficult.
2. Carbon Reduction and hydrogen reduction are not feasible because sodium reacts readily with them to form carbide and hydride.
3. Sodium is readily tarnished in air.
4. Electrolytic reduction from the aqueous solution is also not feasible because Na+ has higher over voltage than H+ of H2O and H2 is produced in preference to sodium.
5. Molten state reduction is also  not so effective because of high melting point of NaCl and relatively low boiling point of sodium.
Later, Down's electrolytic cell overcame these difficulties and sodium was extracted successfully from molten NaCl.

The Cell
﻿↪ The cell in which molten sodium chloride is electrolyzed are based on those developed by Down in 1921.
Diagram of the cell is given in the figure. 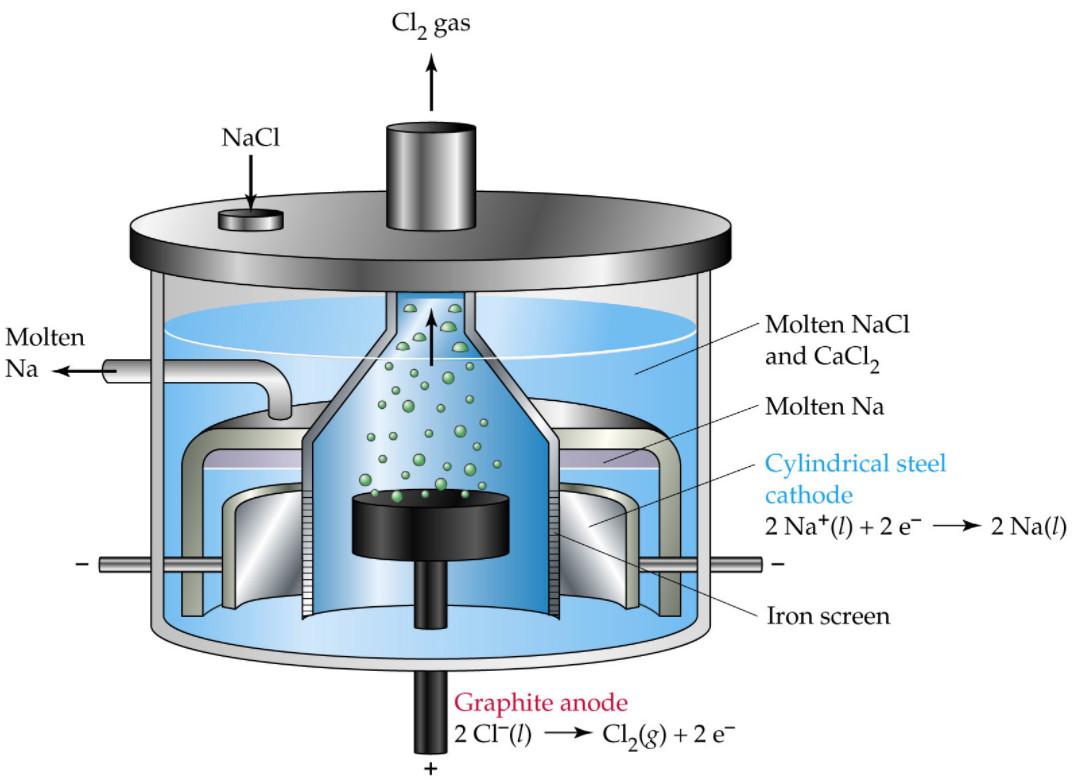 Fig: Down's cell for the extraction of sodium

↪ Mixture of fused sodium chloride and sodium fluoride or calcium chloride 2:3 by weight (melting = 600°C) is taken in an iron tank lined inside with fire bricks.
↪ From the bottom of the tank, a carbon anode is fixed. The anode is surrounded by an iron cathode.
↪ A wire gauze connected to the lower end of the iron hood separated the cathode from the anode.
﻿Principle

﻿At Cathode
↪ ﻿Sodium ions migrate to cathode, neutralize their charge by the gain of electrons and changes to sodium metal.
﻿

At Anode
﻿↪ Chloride ions migrate to the anode, lose their charge.

﻿↪ The chlorine gas evolved escapes through the outlet as an important byproducts.
CaCl2 is added to the mixture in order to decrease melting point of NaCl from 820°C to 600°C because:﻿

↪ M.P. of NaCl is very high (820°C) and it is difficult to maintain.
↪ At high temperature, Na metal gets vaporized to form metallic fog.
↪ Chlorine produced as by product can corrode materials of cell at high temperature.
↪ At this high temperature, metal may form colloidal phase which causes difficulties for separation.
Advantages of Down’s process

↪ Sodium metal obtained by this process is highly pure (99.5% pure)
↪ It is economical.
↪ Its raw material NaCl is very cheap and easily available.
↪ Chlorine is obtained as a valuable by product.
eleven chemistry Alkali Metals