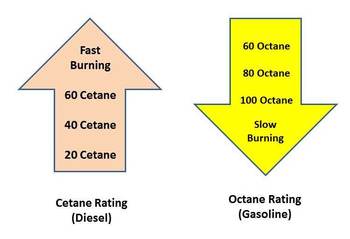 Gasoline is used as a fuel in internal combustion engines of motor cars and airplanes. In such engines, a mixture of gasoline vapors and the air is compressed by a piston within the cylinder of the engine and the compressed mixture is ignited by a spark from the spark plug. As the compressed fuel-air mixture burns, considerable expansion is caused. This results in the movement of the piston and the transmission of the force to the wheel of the motor car or the propeller of the airplane. The efficiency of the engine depends upon the extent to which the fuel-air mixture is compressed at the time of ignition. The greater the compression, the greater is the efficiency. But the increase in compression beyond certain points results in the sudden and irregular burning of the fuel mixture which causes jerk against the piston and gives rise to violent sound. This is known as knocking. Knocking reduces the power of the engine and also causes damage to the piston and the cylinder.

The mixture compression that can be attained in a given engine without any knocking taking place depends upon the composition of the gasoline used as fuel. Therefore, it is a matter of importance to know the relative "anti-knock quality" of the fuel. The anti-knock value of a fuel is usually expressed in terms of octane number ( for gasoline ) and cetane number( for diesel fuel ).

By carrying out tests on individual hydrocarbons, it has been found that n-heptane knocks maximum when used as a fuel. Thus, due to its very poor anti-knock quality, it has been assigned octane number zero. On the other hand iso-octane(2,2,4-trimethylpentane) was found to have the best anti-knock property. Therefore, it has assigned the octane number of 100.

All other fuels are graded between these two extreme values (0-100) by comparing them with a suitable mixture of the above-mentioned compounds as standard. For example, if fuel has octane number 70, it implies that it has the same anti-knock quality as the mixture of 70 parts iso-octane and 30 parts n-heptane. Thus, the octane rating of a fuel may be defined as the percentage by volume of iso-octane and n-heptane which has the same anti-knock qualities as the fuel under examination under similar conditions.