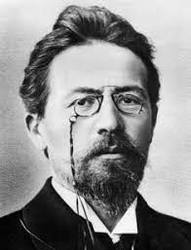 ﻿Russian dramatist and short-story writer, Anton Chekov, sets forth three disparate love stories in his story 'About Love'. The first kind of love is in between a man of medium height, with a puffy face consisting of small eyes; named Nikanor and a beautiful girl named Pelageya. Chekov describes this love story as physical and violent. The next love story that the narrator, Alyohin, tells of is that between him and a Russian girl he fell in love with, back in his learning days. Similarly, the last love story is the unexpressed and platonic love of Pavel Konstantinovich also known as Alyohin and Anna Alexeyevna, the wife of Luganovich.

The story begins on a dark and gloomy day indicating a miserable Alyohin having breakfast along with his friends Ivan and Burkin, in Sofyino. Just then, Nikanor, the cook interrupts them asking what the guests would like for dinner. That is when Alyohin begins telling the love story of Nikanor and Pelageya. Nikanor was a drunkard with a violent temper which made him beat Pelageya every now and then. Despite of his hideous appearance and impudent behaviour towards Pelageya, she was in love with him. She wanted a physical relationship with Nikanor but he was a man of religious beliefs, therefore he wanted to marry her. Likewise, Konstantinovich goes on to talk of his love story with a charming Russian girl who loved him for his wealth thus clarifying it as materialistic.

Furthermore, Alyohin tells about his first dinner with Luganovich and his wife, Anna. Since their very first meet, Alyohin was much attracted to Anna's impressive, elegant and lovely nature. There were times when they couldn't meet each other for months but their love never diminished, hence proving it as the purest form of love. They never had any physical intentions with each other, rather it was a spiritual kind of love. Regardless of their feelings for each other, their love remained unexpressed and went on to become an incomplete love story.

After Alyohin poured his heart out to his friends, the rain stopped and the sun came out indicating that he felt much relieved and comforted after letting all that out from his heart.