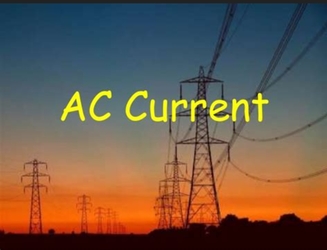 What is Alternating Current?

Alternating current can be defined as a current that changes its magnitude and polarity at regular interval of time. It can also be defined as an electrical current which repeatedly changes or reverses its direction opposite to that of Direct Current or DC which always flows in a single direction as shown below.

From the graph, we can see that the charged particles in AC tend to start moving from zero. It increases to a maximum and then decreases back to zero completing one positive cycle. The particles then reverse their direction and reach the maximum in the opposite direction after which AC again returns to the original value completing a negative cycle. The same cycle is repeated again and again.

Alternating current can be produced or generated by using devices that are known as alternators. However, alternating current can also be produced by different methods where many circuits are used. One of the most common or simple ways of generating AC is by using a basic single coil AC generator which consists of two-pole magnets and a single loop of wire having a rectangular shape.

In this setup, the AC generator follows Faraday’s principle of electromagnetic induction where it converts mechanical energy into electrical energy.