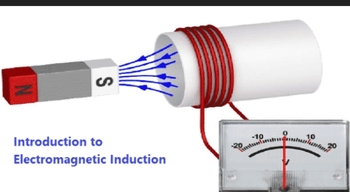 Based on his experiments we now have Faraday’s law according to which the amount of voltage induced in a coil is proportional to the number of turns of the coil and the rate of changing magnetic field.

Mathematically, the induced voltage can be given by the following relation:

The significance of this discovery is a way of producing electrical energy in a circuit by using magnetic fields and not just batteries. Everyday machines like motors, generators and transformers work on the principle of electromagnetic induction.