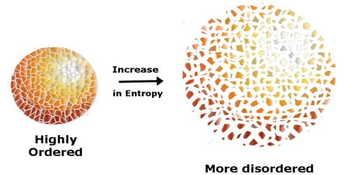 This approach is not an equational approach but rather a statement of impossibility. This includes 'Kelvin-Planck statement' and 'Clausius statement'.

-‘It is impossible for any system to undergo a process in which it absorbs heat from a reservoir at a single temperature and converts the heat completely into mechanical work, with the system ending in the same state in which it began.’ This statement is also known as Engine statement.

-‘It is impossible for any source to have as its sole result the transfer of heat from a cooler to a hotter body.’ This statement is also known as Refrigerator statement.

The above two statements are completely equivalent to each other which is depicted in above Energy diagrams.

This approach uses the concept of Entropy. Entropy provides a quantitative measure of randomness in the system. In an infinitesimal isothermal expansion of an ideal gas , the work done by the gas is equal to the heat added.

The fractional volume change dV/V is a measure of the increase in randomness, and it is proportional to quantity dQ/T. The infinitesimal entropy change during an infinitesimal reversible process at absolute temperature T can be written as ,

If a total amount of heat Q is added during a reversible isothermal process at absolute temperature T , the total entropy change is given by

For entire process, Entropy change is

where a is initial state and b is final state.

-Entropy change is independent of the path. A system will have a definite value of entropy that depends only on the state, not on the processes that led to that state.

So, in reverse cyclic process,

But  irreversible processes involve an increase in entropy.

The entropy in microscopic terms can be calculated as shown below;