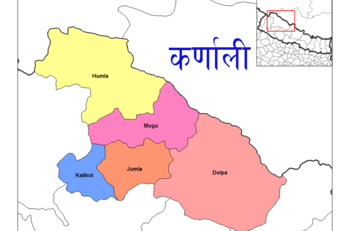 ﻿1. How is Karnali liked economically with the low land regions to the south?

Geographically, Karnali lies to the northern part of Nepal. People of Karnali do not have transportation, sufficient cultivable land and other facilities for better survival due to sloppy hills. Therefore, they have to depend on the lowland regions to the south. They have to go to Nepalgunj in order to sell their items like medicinal herbs, silajit, hashish, hand-knit sweaters and blankets. Similarly, they have to buy things like cotton cloth, aluminum, ironware, spice, distillery equipment etc. there. They have to also depend on lowland regions for their jobs. Thus, Karnali is economically linked with the low land regions.

2.What did the two writers learn about the life and culture of the people of the Kamall region during their journey on foot?

The people of Karnali are innocent, illiterate, religious, traditional and conservative. They believe in superstitions. They are laborious. Most of them are farmers. Some of them are businessmen. They go to Nepalganj carrying medical herbs, hashish, hand-knit sweaters, silajit and blankets to sell. They sell them in Nepalganj and buy the necessary things for them. They return home with cotton cloth, aluminum, ironware, spice, distillery equipment etc. Some people go to the low land regions to get private and government jobs. They are ignorant about soil erosion and problems of deforestation.

3) What does the skeletal looking sal trees indicate about the exploitation of nature?

The skeletal looking sal trees indicate about the exploitation of nature that the environment is being destroyed by the people of Karnali. Most of them are farmers. They rear different domestic animals like goats. They have to chop the branches of trees in order to feed the animals. Forest is the only source of getting fodder for the animals. As a result, they chop branches of the sal trees. Only a few leaves are left on the trees. This indicates the rapid deforestation and environmental decline in the Karnali region.

4) What is Silajit? What are its medicinal uses?

Sitajit is a terlike deposit that oozes from the rocks. Shaped into flat ten-ounce discs, it would bring 60 rupees per disc in Nepalganj. It has pharmaceutical use. It cleans the insides and makes you pure and strong. It is boiled with milk and taken.