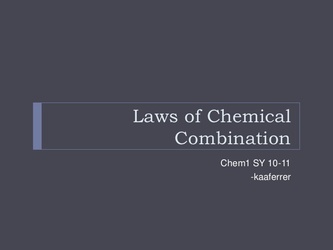 1.All matters are made of small particles i. e atoms

3.Atoms is the smallest particles that takes part in chemical reactions.

4.Atoms cannot be splitted and created during chemical reaction.

In greek, stiochio means an elements and metry means measure which simply forms the measure of elements in combination.

Stiochiometry means The calculations which deals with the mass and volume relationships between reactants and products.There are laws of the Stiochiometry which are discussed below :

1.1:Law of conservation of mass

It was proposed by lavoiser and verified by landolt. According to this law; Total number of mass remains conserved during chemical reactions", "Mass is neither created nor destroyed in a chemical reaction"

According to this laws,

It was proposed by Proust.

It was proposed by Dalton and verified by Berzelius.

It states "When two elements combine to form more than one compound then the different masses of one element which combine with a fixed mass of other elements, bear a simple whole number ratio"

Thus, the weight of oxygen which combines with the same weight of Hydrogen(i. e 2 parts by weight) are in the simple ratio of 1:2. This is simple whole number. Hence, it illustrate the law of multiple proportions.

It states that" When two elements combine separately with a fixed mass of a third element, then the ratio of their masses in which they do so is either same or some whole number multiple of ratio in which they combine with each other.

It states "The volumes of the gaseous reactants and products in a chemical reaction bear a simple ratio(i. e simple whole number ratio) if the volumes are measured at similar conditions of temperature and pressure"

volume of H2:Cl2:HCL which is simple whole no. ratio.

hence it illustrates the law of gaseous volumes.