Oparin and Haldane theory on origin of life 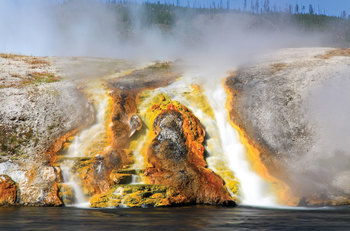 ﻿Oparin and Haldane theory on the origin of life

This theory has been categorised into three sub headings as:

It is believed that earth had been formed around 4.5 billion years ago. There was high temperature and gradually it cooled down on its pace. During the origin the everything must have been in form of gases and atomic nature.The hydrogen, carbon, helium flowed to surface and formed the earth. Slowly there started the interactions of those gases to form simple compounds like water, methane ,so on. These simpler compounds  later aggregated to form the hydrocarbons, hydrocarbons on reaction with water formed oxy and hydroxy derivatives of hydrocarbons. Gradually the synthesis of carbohydrates, fatty acid and glycerol came into the existence.The molecules of different compounds collided, reacted and aggregated in the hot soup forming new molecules like purines, pyrimidines and nucleotides.

There was the rapid formation of nucleic protein as the result of polymerisation of nucleotide. They were considered as naked genes. They were giant molecules and showed certain characters of free living gene.Then the coacervates were formed considered to be the living molecules that gave rise to the life.These coacervates aggregated and finally formed the plasma membrane and certain internal reactions occurred inside it. Then they became abundant  and gave rise to the cell.Early cell types like moneran and protistans were slowly coming in existence.

This involved the diversification and variation in the simplest cell to evolving using the different methods of obtaining food. With increase in the photosynthetic organism, oxygen was released known as oxygen revolution.Due to aerobic mode of  life, organisms started to adapt themselves for aerobic respiration.This led to development of eukaryotes.

eleven biology Life and its Origin