Bijaya Rajbhandari created in God Sees the Truth but Waits 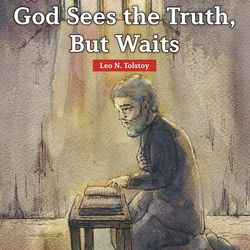 Leo Tolstoy (1828-1910) was a Russian writer and a master of realistic fiction. He was born in a wealthy family in Russia. His parents died when he was a child. He was brought up by his elder brothers and relatives. Tolstoy has written many plays and essays. He has also achieved world renown as a moral and religious teacher.

GOD SEES THE TRUTH BUT WAITS

Tolstoy’s short story 'God Sees the Truth, but Waits' first published in 1872 is about the false conviction and imprisonment of a man for a murder he did not commit, and it takes the form of a parable for forgiveness. In God Sees the Truth, But Waits by Leo Tolstoy we have the theme of guilt, forgiveness, and faith in god.

In the town of Vladimir lived a young merchant named Ivan Dmitrich Aksionov who had two shops and a house of his own. Aksionov was a handsome, fair-haired, curly-headed fellow, full of fun, and very fond of singing. He used to drink much before marriage but later on, he changed himself and became a good man. He had virtuous qualities such as faith, forgiveness, freedom, and acceptance.

As he prepares to go to the Nizhny Fair one summer, his wife urges him not to leave the family saying that she had a nightmare in which he left for the fair and returned with gray hair. He ignores his wife's dream and leaves for the fair.

Halfway to the town, Aksionov encounters a fellow merchant, with whom he stops for the night at an inn. The men have tea together and sleep in adjoining rooms. Aksionov rises before dawn and sets off with his horses and coachman while the air is cool. After twenty-five miles, he stops to feed his horses.

During this break, two soldiers and an official arrive and begin questioning Aksionov about his relationship with the man he had tea with the night before. They explain that the merchant was murdered and robbed. They search Aksionov's luggage. They find a blood-stained knife. Despite Aksionov's claim that he is not the murderer, he is sent to jail.

Aksionov's wife with children comes to visit him in jail. She becomes unconscious seeing her husband in prison clothes. After she comes to her senses, she tells him that she had sent a petition to the Czar, but it had not been accepted Aksionov is shocked when she asks him whether he actually committed the murder for which he has been arrested. His wife’s suspicion of his guilt makes him conclude that he can rely on God alone to know the truth. He is flogged and sent to a Siberian labor camp. Remaining there for 26 years, he loses his youthful cheerfulness and becomes deeply religious.

One day a newly arrived inmate named Makar Semyonich, who is about the same age as Aksionov and from the same hometown, gives an account of what brought him to Siberia. He was suspected of stealing a horse when in reality he had only borrowed it. Nevertheless, he was convicted and imprisoned. The irony is that he had gotten away with doing something much worse earlier in his life.

After overhearing conversations, Aksionov is certain that Semyonich is the man who was responsible for the crime for which he was blamed. One night, he discovers Semyonich digging an escape hole. The next day, the authorities find out the hole. The Governor comes and asks the prisoners who are trying to escape. Aksionov does not wish to see Makar being flogged. He tells the Governor that he knows nothing about who dug the hole. The following night Aksionov finds Semyonich sitting at the foot of his bunk.

Semyonich bends over and whispers a plea for forgiveness. He confesses that it was he who killed the other merchant and stole his money; he then planted the knife so that Aksionov would become the suspect. He falls to his knees and begs for forgiveness, promising to confess to the crimes so that Aksionov will go free. The old man replies that his life is already over and he has nowhere to go. Aksionov breaks down in tears when he sees Semyonich's tears.

Semyonich begs pardon once more. Aksionov assures him that God will forgive him and that he is probably a hundred times worse than he is. After saying this, Aksionov feels a sense of lightness wash over him. He no longer wants to return home or escape

prison; all he wants is to die. Semyonich confesses to the governor at the end of the story. By the time the officials arrange Aksionov's release, Aksionov has already died.

Symbols used in the story:

1.House and shops- it symbolizes Aksionov's family and material possessions

3.Blood-stained knife- it indicates Aksionov's lack of control over his fate.

4.The prison- the prison is a symbol of Aksionov's suffering and his eventual spiritual transformation.

5.The book (the lives of the saints)- indicates religious devotion.