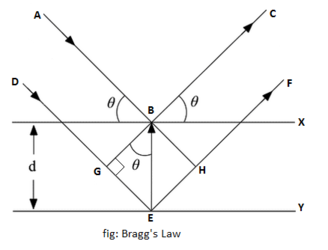 Sir William Bragg and his son Sir Lawrence Bragg studied the diffraction of X-rays in detail and devised a method for determining the wavelength of X-rays. Lawrence Bragg considered that when monochromatic X-rays fall upon the atoms in a single plane of atoms in a crystal (a crystal lattice),each atom scatters a fraction of the incident beam and may be regarded as source of secondary wavelet of X-ray. The crystal acts as a series of parallel reflecting planes. The intensity of the reflected beam at certain angles will be maximum when the path difference between two reflected waves from two different planes is an integral multiple of the wavelength of X-rays, while at some other angles, the intensity of the reflected X-ray, beam will be minimum.

Let us consider a set of parallel atomic planes separated by a distance d. A narrow monochromatic X-ray beam of wavelength λ is allowed to fall on the crystal lattice at a glancing angle ϴ and after reflection from the planes X an Y goes along BC and EF respectively. 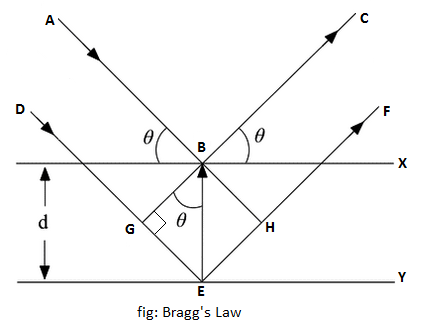 Since X-rays are much more penetrating than ordinary light, there is only partial reflection at each plane. The complete absorption takes place only after penetrating several layers. Let us consider two parallel rays ABC and DEF in the beams, which are reflected by two atoms B and E. E is vertically below B.

This equation is known as Bragg's law or Bragg's equation.

There are various uses of X - rays of which some of them are given below :

Engineering : They are used to test the quality of weldings, moulds and metal castings.They also help in detecting any crack in the body of aeroplanes and the motorcars.

In research : They are widely used in research to investigate the structure of crystals, arrangement of atoms and molecules in matter and their behavior on different molecules. By knowing the X - rays scattered by elements, we know their inner structure and chemical composition.

Medicine: They are used for both diagnosis and cure.

1.In surgery: They are used in surgery to detect the fracture of bones, diseased organic and foreign bodies and growth in the human body. They are also used to diagnose disease in the lungs, kidneys, intestines and other parts of the body.