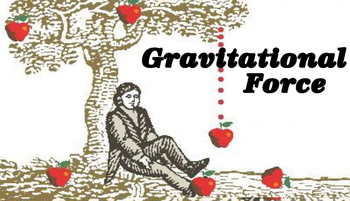 -It  is the force between two masses that exists universally among all bodies in the universe .

-Among four  fundamental  forces of nature ( strong force , electromagnetic  force  , weak force , and gravitational force ) it was the earliest one to be studied extensively. 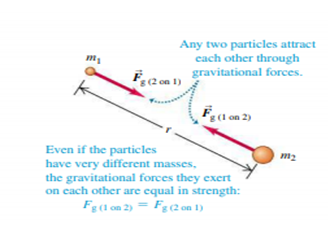 Fig. The gravitational forces between two particles of masses m1 and m2 which are separated by distance ‘r’.

-According to this law , magnitude of force of gravitation (Fg) is determined by the following expression,

-It is known as universal law  because it holds true for every object in the universe without any exception.

If F be the magnitude of  gravitational force between two particles of mass m1 and m2 separated by distance ‘r’ then , according to Newton’s law of gravitation,


where, G is the proportionality constant known as universal gravitational constant.

-It is the gravitational force between two unit masses  separated by a unit distance .
- Its value was first determined experimentally by Henry Cavendish as

-It is called universal constant because its value is same for any pair of masses and is independent of the nature of medium in which the masses are kept.
-It is also independent of
(a) chemical composition of the masses

(b) the temperature and pressure

( c) the direction of the gravitation forces between the masses

-It is always attractive .
-It is independent of the medium.
-It is a conservative force i.e no  work done by gravity if a particle  moves in a closed path .
-It always acts along the line joining two masses.

-It is a central force  i.e it acts along the line joining the centers of the two interacting bodies .
-Gravitational force between two bodies does not depend upon the presence of other bodies between them.

Done with Newton's idea of Gravity, try that of Einstein: