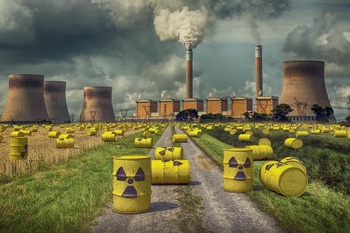 Nuclear energy is the energy in the nucleus, or core, of an atom. Atoms are tiny units that make up all the matter in the universe, and energy is what holds the nucleus together. There is a huge amount of energy in an atom's dense nucleus. In fact, the power that holds the nucleus together is officially called the "strong force".The fuel that nuclear reactors use to produce the nuclear pellets of the elements uranium. In a reactor, atoms of uranium are forced to break apart. As they split, the atoms release tiny particles called fission products.

﻿﻿The subdivision of heavy atomic nucleus, such as that of uranium or plutonium, into two fragments of equal parts. The process is accompanied by a release of a large amount of energy. In nuclear fission, the nucleus of an atom breaks up into two lighter nuclei. The process may take spontaneously in some cases or may be induced by the excitation of the nucleus with a variety of particles or with electromagnetic radiation in the form of gamma rays.

﻿﻿Einstein's mass-energy relation is used for the calculation of nuclear energy. According to it, mass 'm' can be converted into energy; E equivalent to mc2 [E= mc2], where c stands for the velocity of light in vacuum (3*10 m/s). Mass-energy relation was founded by Albert Einstein in1905 A.D. The enormous amount of heat energy released by nuclear fission is used for producing steam that rotates the blades of generators. It then generates electricity.

﻿The process by which nuclear reactions between light and elements form heavier elements(up to iron). In cases where nuclei belong to elements with low atomic numbers substantial amount of energy is released.

The fusion does not take place under ordinary conditions. It occurs only under extremely high pressure and high temperature. The hydrogen bomb is based on nuclear fusion. It is not possible to generate useful energy by fusion so far on the earth.