﻿﻿Energy is the capacity of doing work. It may exist in potential, kinetic, thermal, electrical, chemical, nuclear, or other various forms. There are, moreover, heat and work - energy is the process of transfer from one body to another.

﻿Classification of sources of energy

﻿Wood, coal petroleum, etc. are some of the energy sources of energy. They produce heat when they are burnt. Energy sources can be classified into two types: renewable and non-renewable.

﻿By now, you should have understood what "sources of energy" means. So now we will be talking about some of the major energy sources.

Solar energy: Solar energy is a renewable source. It is derived from the sun's rays. Solar energy is converted directly to electricity through solar photovoltaic panels. Solar power has grown in popularity since the 1970' s due to the oil crisis. Now, since solar energy comes from the sun let's talk a little about the sun. So, the sun is a big ball of fire and is very large in comparison to earth. By mass, the sun is so huge that even the total mass of the solar system members together becomes 0.0015th part of the sun. The surface and centre temperatures of the sun are 5.7*103 °C and 1.5*107 °C respectively. At this high temperature, no substances can exist in solid or liquid states. Hence, the sun is a mass of very hot gases. The sun emits 2.7*1024 KW energy every second. The earth receives a small fraction of the energy emitted by the sun due to a very large distance between the sun and the earth. The earth gets 2.6*1022 joule of energy every second. 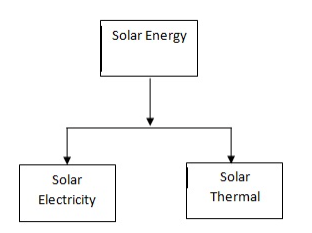 The given diagram is for the application of solar power in Nepal.

﻿Advantages and disadvantages of solar energy

﻿Traditional use of solar energy

﻿Sun is the ultimate source of energy.

﻿Nuclear fusion is the source of solar energy.