Company and its Characteristics

What is a Company?

﻿A corporation under Company law or corporate law is specifically referred to as a “legal person” i.e. as a subject of rights and duties that is capable of owning real property, entering into contracts, and having the ability to sue and be sued in its own name. In other words, a corporation is a juristic person that in most instances is legally treated as a person, and empowered with the attributes to own its own property, execute contracts, as well as ability to sue and be sued.﻿ It is a legal person and is only created by law and dissolved only in accordance to law. It is not true that company implies an association because even a single person can create a company.  Thus a company may be established by one or more persons, should be established with the intention of making a profit, should have one or more objectives and there are mention in memorandum. The main definition given by some scholars are given below:

According to Kimball and Kimball, “A corporation is by nature an artificial person created or authorized by the legal stature for some specific purpose.”

The companies in Nepal are established and governed by the Nepal Company Act 2063.

﻿There are some salient features that distinguished a company from other forms of business enterprises.

Following are those characteristics/features of the company: 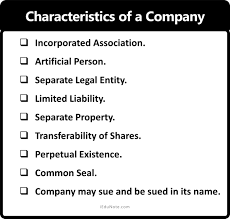 A Company must be incorporated or registered under the Companies Act of your country. The minimum number required for usually starts from 5 or 7, but it varies from country to country.

A company is created with the sanction of law and is not itself a human being; it is, therefore, called artificially; and since it is clothed with certain rights and obligations, it is called a person. A company is, accordingly, an artificial person.

Unlike a partnership, the company is distinct from the persons who constitute it. Section 34(2) says that on registration, the association of persons becomes a body corporate by the name contained in the memorandum.

The company being a separate person, its members are not as such liable for its debts. Hence, in the case of a company limited by shares, the liability of members is limited to the nominal value of shares held by them. Thus, if the shares are fully paid up, their liability will be nil. However, companies may be formed with unlimited liability of members, or members may guarantee a particular amount.

Shareholders are not, in the eyes of the law, part owners of the undertaking. The Supreme Court held that a shareholder is not the part-owner of the company or its property; he is only given certain rights by law, e.g., to vote or attend meetings, to receive dividends.

﻿Since business is separate from its members in a company form of organization, it facilitates the transfer of members’ interests. The shares of a company are transferable in the manner provided in the Articles of the company. However, in a private company, certain restrictions are placed on such transfer of shares, but the right to transfer is not taken away absolutely.

A company being an artificial person cannot be incapacitated by illness, and it does not have an allotted span of life. The death, insolvency, or retirement of its members leaves the company unaffected. Members may come and go, but the company can go forever.

A company is an artificial person is not bestowed with a body of natural being. Therefore, it has to work through its directors, officers, and other employees. But, it can be held bound by only those documents which bear its signatures. The common seal is the official signature of a company.

9.The company may sue and be sued in its name.

Another fall-out of separate legal entity is that the company if aggrieved by some wrong done to it, may sue or be sued in its name.